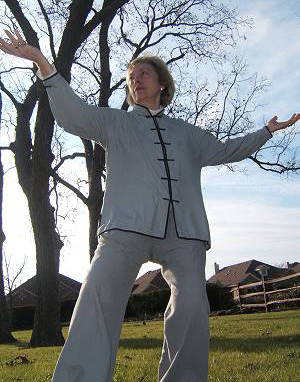 Since 1991, my life has been influenced and enhanced by T’ai Chi.  I went to classes and learned the famous T’ai Chi principles and movements, and then in 1999 I began to teach others.  My first class was April, 16, 1991, which I attended every Tuesday night through the end of the year 1998.  Master Lu Hung Bin created the Lu 64 Move Tai Chi Form, which he taught in Taiwan. My teacher, Iva Lim Peck, learned the form from him while studying acupuncture in Taiwan.

I learned four forms from Iva; the 64-Move Yang Form, the Staff Form, Broad Sword Form and the Fan Form. In 1998, our school closed and those who were in the class were asked to go into our communities and teach. The same year I began teaching in Allen and since that time I have accumulated over 5,000 hours of T’ai Chi practice and teaching.

I initiated teaching T’ai Chi through community education classes with the Allen Independent School District, in Allen, Texas in 1998. In 1999 began to teach at the City of Allen, Joe Farmer Recreation Center. The class, “Introduction to T’ai Chi”, has become one of the most popular classes offered by the City of Allen.  For more advanced students, I teach the 64-Move Yang Form. This advanced Form may take more than a year to learn, yet over 53 students have achieved this worthy goal.

From 2003 to 2011, I taught residents of Heritage Ranch Retirement Village, in Fairview Texas. Since 2011 I have taught at Caron Rehab Facility in Princeton, TX.